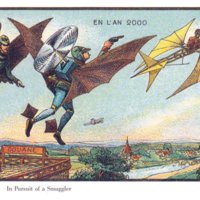 A series of futuristic pictures by Jean-Marc Côté and other artists issued in France in 1899, 1900, 1901 and 1910. Originally in the form of paper cards enclosed in cigarette/cigar boxes and, later, as postcards, the images depicted the world as it…

The painter Claude Monet spent his early twenties as a soldier in French North Africa, yet none of his works or writings from this period survive. Jeffrey Meyers pieces together a portrait of the artist as a young man.

The Serious and the Smirk: The Smile in Portraiture

Why do we so seldom see people smiling in painted portraits? Nicholas Jeeves explores the history of the smile through the ages of portraiture, from Da Vinci’s Mona Lisa to Alexander Gardner’s photographs of Abraham Lincoln.

View the items in Изкуство (Arts)