Classical sexual selection theory1, 2, 3, 4 provides a well-supported conceptual framework for understanding the evolution and signalling function of male ornaments. It predicts that males obtain greater fitness benefits than females through multiple mating because sperm are cheaper to produce than eggs. Sexual selection should therefore lead to the evolution of male-biased secondary sexual characters. However, females of many species are also highly ornamented5, 6, 7. The view that this is due to a correlated genetic response to selection on males1, 8 was widely accepted as an explanation for female ornamentation for over 100 years5 and current theoretical9, 10 and empirical11, 12, 13 evidence suggests that genetic constraints can limit sex-specific trait evolution. Alternatively, female ornamentation can be the outcome of direct selection for signalling needs7, 14. Since few studies have explored interspecific patterns of both male and female elaboration, our understanding of the evolution of animal ornamentation remains incomplete, especially over broad taxonomic scales. Here we use a new method to quantify plumage colour of all ~6,000 species of passerine birds to determine the main evolutionary drivers of ornamental colouration in both sexes. We found that conspecific male and female colour elaboration are strongly correlated, suggesting that evolutionary changes in one sex are constrained by changes in the other sex. Both sexes are more ornamented in larger species and in species living in tropical environments. Ornamentation in females (but not males) is increased in cooperative breeders—species in which female–female competition for reproductive opportunities and other resources related to breeding may be high6. Finally, strong sexual selection on males has antagonistic effects, causing an increase in male colouration but a considerably more pronounced reduction in female ornamentation. Our results indicate that although there may be genetic constraints to sexually independent colour evolution, both female and male ornamentation are strongly and often differentially related to morphological, social and life-history variables. 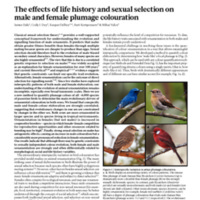