The negative effect of increasing atmospheric nitrogen (N) pollution on grassland biodiversity is now incontrovertible1, 2, 3. However, the recent introduction of cleaner technologies in the UK has led to reductions in the emissions of nitrogen oxides, with concomitant decreases in N deposition4. The degree to which grassland biodiversity can be expected to ‘bounce back’ in response to these improvements in air quality is uncertain, with a suggestion that long-term chronic N addition may lead to an alternative low biodiversity state5. Here we present evidence from the 160-year-old Park Grass Experiment at Rothamsted Research, UK6, that shows a positive response of biodiversity to reducing N addition from either atmospheric pollution or fertilizers. The proportion of legumes, species richness and diversity increased across the experiment between 1991 and 2012 as both wet and dry N deposition declined. Plots that stopped receiving inorganic N fertilizer in 1989 recovered much of the diversity that had been lost, especially if limed. There was no evidence that chronic N addition has resulted in an alternative low biodiversity state on the Park Grass plots, except where there has been extreme acidification, although it is likely that the recovery of plant communities has been facilitated by the twice-yearly mowing and removal of biomass. This may also explain why a comparable response of plant communities to reduced N inputs has yet to be observed in the wider landscape. 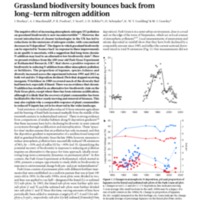