In recent years, several extreme weather disasters have partially or completely damaged regional crop production1, 2, 3, 4, 5. While detailed regional accounts of the effects of extreme weather disasters exist, the global scale effects of droughts, floods and extreme temperature on crop production are yet to be quantified. Here we estimate for the first time, to our knowledge, national cereal production losses across the globe resulting from reported extreme weather disasters during 1964–2007. We show that droughts and extreme heat significantly reduced national cereal production by 9–10%, whereas our analysis could not identify an effect from floods and extreme cold in the national data. Analysing the underlying processes, we find that production losses due to droughts were associated with a reduction in both harvested area and yields, whereas extreme heat mainly decreased cereal yields. Furthermore, the results highlight ~7% greater production damage from more recent droughts and 8–11% more damage in developed countries than in developing ones. Our findings may help to guide agricultural priorities in international disaster risk reduction and adaptation efforts. 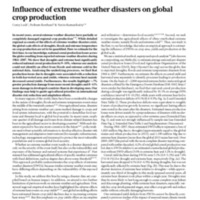